What It Takes to Be a Champion 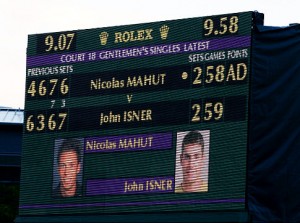 June 23rd, 2010 is a date that will go down in Wimbledon history. This is the date that two guys whom you’ve probably never heard of—Nicolas Mahut and John Isner—battled for ten straight hours in a match that had to be completed the following day because, well, because it got dark!

Now, why should you care? (I figured I’d say it first before you could get all snotty about it.) What’s the leadership lesson for your business?

Actually, there are two:

“That’s not me,” you say smugly. Maybe not, but which set of scenarios is closer to your standard operating procedure? Be honest. If you can honestly say the first set is more like you, then congratulations—you’re ahead of the rest of the pack. But even if that’s true for you personally, how about the rest of your team? Do they have the wherewithal to give the job their all, despite the odds of some ultimate prize?

There have been a lot of great rock bands since the 60s, and they’ve given us countless hours of great music. But there’s only been one Beatles. Now, imagine if all of those hundreds (thousands!) of other bands had said to themselves, “We’re never going to be as good, as popular, or as successful as the Beatles, so why even bother?”