What Can You Learn from “Shark Tank”? 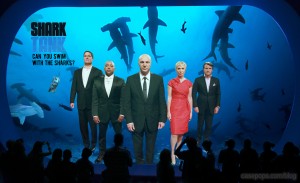 Have you ever watched the TV show Shark Tank? Or, if TV’s not your thing, maybe you’ve read the spin-off book: Shark Tank Jump Start Your Business: How to Launch and Grow a Business from Concept to Cash

Basically, it’s a show where entrepreneurs pitch their ideas for new products to a panel of multimillionaire investors, who can then bid on the idea if they think it’s promising. Sounds like a dream come true for the entrepreneurs, right? Except that most of the time (and I’ll admit I haven’t watched all that many episodes), it seems like the multimillionaires shoot the idea down and decline to bid (or bid a very small amount in exchange for a very large ownership share).

But the real investors don’t do that. Why not? These entrepreneurs come out, they’re excited, they’ve got a (possibly) great new idea, they’ve rehearsed their sales pitch, they’re affable, they actively involve the investors and get them laughing, and then…nothing. No bids. Somehow the investors are able to see past the excitement and enthusiasm. What is it that they (the investors) know that the rest of us don’t?

In his wonderful book, The Power of Why: Breaking Out in a Competitive Marketplace

[quote]You may have a great business or idea, extraordinary products and services, a legendary brand, even a compelling sales story. But unless you know and understand what consumers really want and why, you’ll always wonder why you aren’t doing better.[/quote]

You Must Know Your Marketplace

The Shark Tank investors see the big picture; they see the forest. What’s the forest? It’s the economics of production, it’s the return on investment, and, of course, it’s the dynamics of the marketplace. The entrepreneurs see only the trees: the cool idea that they came up with, and about which all their friends said, “You should totally do that, Dave, you’ll get rich!”

So what does it take to make it? It takes the ability to see both the trees and the forest. Yes, you absolutely need that excitement, that enthusiasm, that emotional drive. That’s the fuel that will power you through the exhausting process of bringing an idea to fruition. But you also need to be able to put that aside and take a hard, unbiased look at your marketplace to see if your idea is truly viable. It’s the rare entrepreneur who can do both, which is why it’s often invaluable to get an outside perspective before diving into the deep end.

[Tweet “It’s often invaluable to get an outside perspective before diving into the deep end.”]