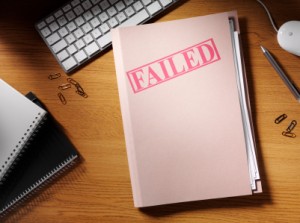 We spend far too much time trying to avoid failure. It drives many (maybe even most) of our decisions—at least the bigger ones.

“What if this doesn’t work?”

“What if I get embarrassed?”

Sure, these questions—and others like them—need to be taken into consideration. But all too often they become the primary decision driver. We make our decisions based on the avoidance of failure rather than the achievement of success. And so we end up taking the safest route, the one that will keep us out of trouble.

The problem is that greatness doesn’t live along that route.

Greatness. Innovation. Influence. Sounds kind of like the Beatles, doesn’t it? When they began a project, they didn’t spend a lot of time mired in the “What if we fail” question. Granted, if they had then they might not have produced the amateurish Magical Mystery Tour TV movie. But then they also might not have produced Sgt. Pepper. Or the White Album. Or Abbey Road.

Look, there’s no guarantee of success. You might fail. You might get embarrassed. You might even get sued. But if you let the fear of failure be your deciding factor, it’s like you’re aiming for the middle. And I don’t think that’s where you want to be.

Take a chance this year. Aim higher. Aim for success.